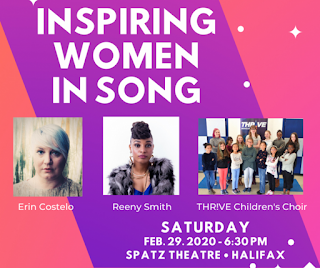 Join CIOE 97.5 FM and the Nova Scotia Advisory Council on the Status of Women as they launch a week of events and programs to celebrate International Women’s Day with this special concert.

Want to support the next generation of Nova Scotian artists? Donate today! (smile)
Posted by nstalenttrust at 8:00 AM No comments:

Get a behind-the-scenes look 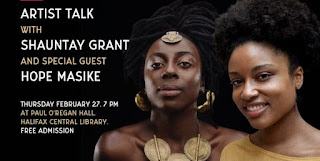 at the creative process as playwright and Talent Trust alumna Shauntay Grant workshops scenes from a new theatrical work-in-progress.

February 27 at 7 p.m.
at the Paul O'Regan Hall at the Halifax Central Library.

She will be joined by Zimbabwean musician Hope Masike for this special event.

Admission is free.
Shauntay’s play The Bridge was produced at Neptune Theatre in 2019 in collaboration with 2b theatre company and Obsidian Theatre.

Want to hear more about the Talent Trust? Please sign up for our newsletter.
Want to support the next generation of Nova Scotian artists? Donate today! (smile)
Posted by nstalenttrust at 10:16 AM No comments:

Originally from Halifax, Dale Kavanagh is now one of the outstanding interpreters of the international guitar scene and Musique Royale is honoured to present her in her native province.

Please reserve a spot by getting in touch with Barbara Butler if you would like to attend. Tickets are $35.

Further information from the Musique Royale:
Dale Kavanagh is a laureate of international competitions - Segovia Competition (Spain, 1987) - Int. Guitar Competition of Gargnano (Italy, 1988) - Neuchâtel (Switzerland, 1986) - Int. Scandinavian Competition (Finland, 1988). She is a guest at major music and guitar festivals worldwide and has performed more than 1,700 concerts as a soloist and in the Amadeus Guitar Duo in over 70 countries. As a soloist in the orchestra, she has performed with many orchestras such as the Gewandhaus Orchester Leipzig, the Prague Chamber Orchestra, the Thüringen Philharmonie Gotha-Suhl, the Berliner Sinfoniker, the President Orchestra Ankara, Symphony Nova Scotia and many more. Dale Kavanagh is also a composer. Her own compositions appear at Chanterelle, Heidelberg, Hubertus Nogatz, Essen and Edition Margaux, Berlin.

From 1998 to 2003 she was a lecturer at the Musikhochschule Dortmund, from 2003 to 2009 “Musician in Residence” at Acadia University in Canada and since 2003 she teaches as a Professor at the Hochschule für Musik in Detmold. From 1999 to 2014 she was exclusively under contract with Hänssler Classic, since 2014 her CDs are released with Naxos.

Want to hear more about the Talent Trust? Please sign up for our newsletter.
Want to support the next generation of Nova Scotian artists? Donate today! (smile)
Posted by nstalenttrust at 7:30 AM No comments:

Brooklyn Law will be dancing in Cinderella at the Spatz Theatre on February 16, 2020


Join the dancers of the Maritime Conservatory School of Dance. Wonderful to see that 2019 scholarship recipient Brooklyn Law is one of the dancers.

The performances will be shown

From the Maritime Conservatory School of Dance website:
Cinderella is created and choreographed by artistic faculty of the School of Dance, Diana Rutherford, Alexa Cherrett and Julia Roberts, working in collaboration with costume director Kate Mitchelle and set designer John O'Neil.

The Maritime Conservatory School of Dance has been training dancers for more than 50 years. Our graduates are professional dancers and dance teachers, their dedication and their artistry will astound you—from our youngest dancers, prepping to be Cinderella’s mice, to our corps de ballet, who draw on their many years of dance training as they learn hundreds of steps and complex choreography.

Tickets can be purchased at https://spatztheatre.boldtypetickets.com/events/101614956/cinderella

Want to hear more about the Talent Trust? Please sign up for our newsletter.
Want to support the next generation of Nova Scotian artists? Donate today! (smile)

Posted by nstalenttrust at 8:17 AM No comments:

You probably had some great ideas how to improve your health this year but it's already February and you wonder where to start.
Don't despair the solution is just a click away. (smile)

Start your wellness program with us and at the same time make it possible for young Nova Scotian arts students to pursue their dream to become professional artists?

Join Team Talent Trust for the Scotiabank Blue Nose Marathon on the long weekend in May - May 15-17, 2020.

Train with us for a 2 KM run, a full marathon or any length in between and be fuelled by your friends that are sponsoring your run. Last year's team members were able to raise over $2,000 for the Scholarship Fund let's double that this year. All ages welcome!

Team Talent Trust is here to cheer you on, help you with your training, and support you when you need it.
It's just more fun to be part of a team.

All proceeds raised will go 100% towards the Talent Trust's Scholarship Fund.

Sing up today and join our Team Talent Trust to start your wellness program today.
https://raceroster.com/25342?aff=FGKM7

Our Team Captain for this year is Victoria Hines, NSTT board member and Team motivator. (smile)
Victoria will be glad to connect with you through events(at)nstalenttrust.ns.ca

Don't hesitate to ask her any questions you might have in regards to Team Talent Trust.
Thank you for stepping it up for your own wellness and health!

Posted by nstalenttrust at 7:00 AM No comments:

Also great to see the names of Talent Trust supporters like artists Terri Whetstone, Dawn MacNutt plus our board member Kay Stanfield.

The exhibition continues until February 27, 2020.

Want to hear more about the Talent Trust? Please sign up for our newsletter.
Want to support the next generation of Nova Scotian artists? Donate today! (smile)