It is always exciting to catch up with past scholarship recipients and learn about their achievements, especially those artists who began their artistic journeys many years ago.  Valerie Colgan received a Talent Trust theatre scholarship in 1958 to train at the London Academy of Music and Dramatic Art.  After completing her training, Valerie remained in London where she has been acting and teaching theatre for the past 64 years. 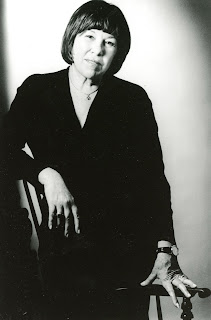 Valerie has had an exceptional career, with an extensive CV that includes film, television, theatre, and radio.  There are far too many roles to list, but some of her most famous roles include Lucilla Harris in Anne of Green Gables (1972), Outer Space Controller in Aliens(1986), and War Department Clerk in Saving Private Ryan (1998).  Her work also includes many plays with the Royal Shakespeare Company, West End, and Chichester Theatre Festival, as well as over 100 BBC radio plays.

She has spent many years teaching theatre at several universities and colleges.  She served at The City Literary Institute as the Head of Drama, Dance and Speech Department with 3500 students in 1990, and Head of Performing Arts Department with 7000 students in 1994.  Valerie is a Trustee of The Royal Victoria Hall Foundation, a charity that supports smaller-scale theatre projects in London.  She is also an Honourary Governor of Sadler's Wells Foundation, one of the world's leading dance organizations that supports and mentors emerging artists.

Now 86, Valerie is still acting and teaching.  She was thrilled to catch up with the Talent Trust to update us and express thanks for the support in starting her artistic career so many years ago: "I am writing to thank you very sincerely for helping me when I was young.  You gave me a grant in 1958 to train at the London Academy of Music and Dramatic Arts for three years and I have been acting and teaching acting in London ever since.  At 86, I can say I have had a wonderful life thanks to your early help.  Yours gratefully, Valerie Colgan."

Posted by nstalenttrust at 1:50 PM No comments: 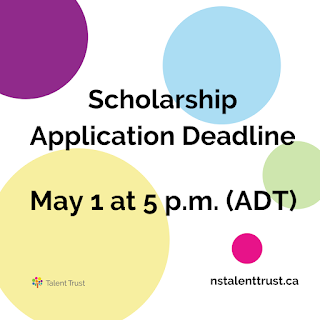 Applications are now being accepted for Nova Scotia Talent Trust scholarships for studies between September 1, 2022 and April 30, 2023. The deadline is May 1 at 5 p.m. ADT. Learn more here.

Apply early so that we can help you improve your application and avoid last minute technical problems.

We advise applicants to read the submission guidelines  carefully and to submit applications early since there are a number of changes for film, music, visual arts, dance, circus arts, literary arts, and theatre this year.

Please let the studying artists in your life know about our scholarship program.

For questions about scholarships and applications please get in touch with our Scholarship Program Coordinator Jackie Dowling at scholarship(at)nstalenttrust.ns.ca.

Posted by Scholarship at 7:00 AM No comments: 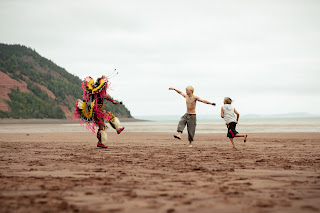 Congratulations to former Talent Trust scholarship recipients Bretten Hannam (writer and director) and Gharrett Paon (producer) whose film Wildhood was nominated for Best Motion Picture at the 2022 Canadian Screen Awards.
Gharrett was the winner of both the Shelagh MacKenzie Award and the 2011 Canada Game Young Artist of Excellent Award in 2017.
Other nominations Wildhood received are:
Wildhood will be in theaters March 11, 2022.
Want to hear more about the Talent Trust? Please sign up for our newsletter.
Want to support the next generation of Nova Scotian artists? Donate today! (smile)
Posted by Scholarship at 9:00 PM No comments:

The World of Yousuf Karsh: A Private Essence 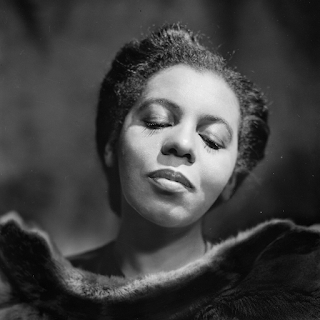 Portia White's connection to the Talent Trust runs deep. In 1944, members of the Halifax Ladies Club, along with voice teacher Dr. Ernesto Vinci, successfully advocated the city of Halifax and the province of Nova Scotia for unparalleled financial support towards her studies in New York. Portia White ascended to become one of the best singers of the 20th century. The Talent Trust, with the help of the Dalhousie Music in Medicine HEALS Program, supports her legacy through the Portia White Award for a Nova Scotia voice student. You can lean more about the Portia White/Talent Trust connection here.

Running March 12 - October 16, 2022 the Canadian Museum of Immigration at Pier 21 is hosting a special exhibition featuring the work of famed photographer Yousuf Karsh, the photographer of the iconic Portia White image many recognize today.

You can learn more about The World of Yousuf Karsh: A Private Essence exhibit here.
Want to hear more? Please sign up for our newsletter.
Want to support the next generation of Nova Scotia artists? Donate today!
Posted by Scholarship at 5:00 AM No comments: