Carrigan MacDonald and Claire Campbell got to dance together for the first time! Both are studying at École Supérieure de Ballet du Québec (ESBQ).

Posted by nstalenttrust at 8:30 AM No comments:

Join us to celebrate the 2017 Special Award Recipients on December 12, 2017 at 2 p.m. at the Halifax Central Library

We are looking forward to host the ceremony in a space that is open to the public and to celebrate the recipients' achievements with all Nova Scotians.

We hope to see you there too. (smile)

Come on out and meet these wonderful emerging artists.

Posted by nstalenttrust at 9:00 AM No comments: 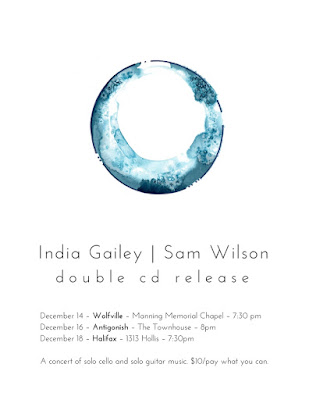 India Gaily and Sam Wilson will release their new CDs at the same time.

Posted by nstalenttrust at 11:45 AM No comments:

Invitation to Portia White Gala Concert on Dec 8, 2017 in Halifax 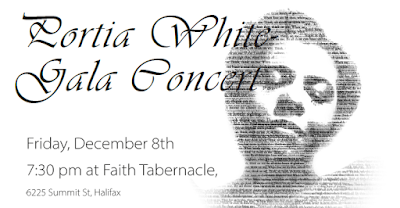 We hope you join us for the

Tickets are $15 for all.
Use our Eventbrite online ticketing service: http://tiny.cc/Portia2017
or printed tickets can be obtained from chorale and band members, or reserved
through the Medical Humanities office at (902) 494-1533 or at medhuman(at)dal.ca.

The Portia White Gala concert will feature the Dalhousie Health Professions Choral and Ensembles and the Sackville Concert Band. Our 12th Portia White Gala showcases a repertoire that includes a special Passchendaele remembrance piece, a final tribute to Canada 150, and a  selection of seasonal favorites.

A part of the proceeds of this concert will support a young Nova Scotian musician through the Talent Trust. The NSTT was started in 1944 to assist the career of Portia White and has continued in its support of talented Nova Scotian artists in their formative years. The Dalhousie University Humanities-HEALS Program is pleased to be able to make a yearly contribution to this worthy cause.

We would like to thank Dr. Wendy Stewart, Ana Bela Sardinha, David Elliott, Bryan Crocker, Jim Forde, the choir members, the Sackville band members, and the many volunteers that will make the concert yet another memorable event.

During the intermission you will be able to treat yourself again to Bill Chaddock's fine fudge in support of the NSTT's Scholarship Program. Portia White's family has donated 100 CDs of 'Portia White - First You Dream to the NSTT. The CD is a compilation of three concerts featuring contralto Portia White. They can be purchased for $20 with all proceeds going towards the Portia White Award. Thank you Bill Chaddock, Chris White and the whole White family for your generous support.
Posted by nstalenttrust at 12:30 PM No comments:

Suzanne Rigden, soprano performs in Mozart's Messiah on December 21 and December 22, 2017 with Symphony NS in Halifax

Suzanne Rigden will perform in Mozart's Messiah on

This evening will feature:

From Symphony NS' website:
For the first time in over 15 years, Symphony Nova Scotia presents Mozart’s magnificent Messiah! Once a staple of Christmas concerts worldwide, Mozart’s 1789 arrangement of Handel’s great oratorio is now rarely performed – but it remains a rich, dramatic, and nuanced interpretation that showcases both composers’ incredible genius. With added woodwinds, horns, and trombones, and a variety of new classical colours and flourishes, Mozart’s Messiah is a grand, fascinating masterpiece, and a chance to discover this beloved holiday favourite all over again.

More about Suzanne Rigden can be found at https://www.suzannerigden.com/

For tickets go to: https://symphonynovascotia.ca/concerts-and-tickets/concerts/rebecca-cohn-auditorium/mozarts-messiah/
Posted by nstalenttrust at 1:00 AM No comments:

Do you like to support emerging Nova Scotia artists through our Scholarship Fund and get a chance to win a Basket filled with art experiences?

Raffle tickets can be purchased in person at the NSDCC's Christmas Show at the Cunard Event Centre, Pier 23 in Halifax from Nov 17 - Nov 19.

Our friendly board members and volunteers will be happy to chat with you about Talent Trust recipients and all the wonderful donations by local art organizations and artists. (List attached below.)

This year we are dividing the donations up into three baskets. Your chances to win are bigger.

Raffle tickets are 1 for $5 or 5 for $20. We accept cash and cheques. (There is an ATM in the Cunard Centre).
All proceeds will go in full towards our Scholarship Fund.
You can only enter the draw if you live in Nova Scotia.
Licensed by the Alcohol and Gaming Authority: AGD-103528-17

Where and When:Cunard Event Centre at Pier 23
961 Marginal Road, Halifax

We thank Susan Hanrahan and Julie Rosvall of Craft Nova Scotia Designer Craft Show for their support. The Christmas show is a juried craft event of Maritime artists.

The draw will be held on December 12, 2017 at 3:45 p.m. during our annual Special Awards Ceremony at the Central Library in Halifax, NS.


Thank You to all our friends from the arts community for their generous contributions.

Symphony Nova Scotia: 2 tickets to Rhapsody in Blue and West Side Story on April 21, 2018  symphonynovascotia.ca


You can only enter the draw if you live in Nova Scotia.

Licensed by the Alcohol and Gaming Authority: AGD-103528-17
Posted by nstalenttrust at 8:30 AM No comments:

The Talent Trust is proud to announce the creation of the Yue Lih “Lee” and Marion Kuo Award. The award will be given to a Talent Trust scholarship recipient who shows exceptional commitment and potential in music as an instrumentalist. The award is $1,000 and is made possible by Marion Kuo and Earl Wadden.

“This award will celebrate my father's life and his love for music. My husband and I are happy to help young musicians succeed in their formative years”, states Marion Kuo.

Marion Kuo has been a member of the Sackville Community Band Society for over ten years. She performs on a regular basis with the Sackville Concert Band at the Portia White Gala Concert. She has been an accompanist/band player for several choirs, orchestras and a community theatre; she volunteers with Seniors Groups regularly.

Marion Kuo’s father Lih Kuo was born in Swatow, China on January 6th, 1916 (as China became a Republic following the Last Emperor). He went to England n 1938 under a student exchange program as part of Britain’s reparation for the Opium Wars. However, when the 2nd World War broke out, he was unable to return home and stayed in England as a “Friendly Alien”. Although he was not a musician, he was interested in music and encouraged his daughter Marion in musical studies - mainly piano, but also cello and church organ. He died in 2011.

The Yue Lih and Marion Kuo award will be presented for the first time at the Special Awards Ceremony on December 12, 2017 from 2- 4 p.m. at the Halifax Central Library. The event is open to the public.

For more information about the special awards go to http://nstalenttrust.ns.ca/Awards/Special-Awards/
Posted by nstalenttrust at 10:43 AM No comments: 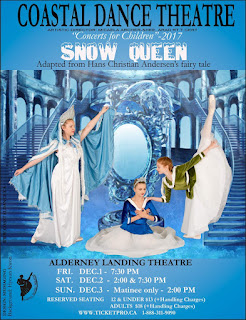 Hans Christian Andersen wrote The Snow Queen about 175 years ago. It is a magical story about friendship, courage and determination.

Kaya is Gerda's very best friend, but at a Christmas skating party, Kaya looks up at the snowflakes and her eye is struck by a falling piece of the Snow Queen ‘s Magic Mirror. The wicked mirror makes everything beautiful and kind look ugly and mean...and Kaya can only see hateful and nasty things. She is mean to Gerda and to all her friends and is swept away by the Snow Queen to her cold palace in the North.

But Gerda is determined to rescue Kaya and bravely follows her through many adventures until, all alone, she can save her friend from the Snow Queen 's cold grasp.

Join brave Gerda on her exciting quest to rescue her best friend Kaya from the spell of the cold Snow Queen. Meet Imps and courtiers, snowflakes and flowers, crows and robbers as Gerda travels ever North to the Snow Queen 's palace to free Kaya.
Posted by nstalenttrust at 12:00 PM No comments:

Canning’s Aliah Schwartz, 2015’s Lieutenant Governor's Award and 2014 Canada Games Young Artist of Excellence Award, is in the beginning stages of creating and developing an aesthetic with Montreal’s Guillaume Loslier-Pinard.


Together they are Blunder Blunder and will show their first piece No Need for Blue Jeans Here is “situated in a limbo between life and death, the line between humour and tragedy.” Schwartz is currently completing her BFA in contemporary dance at Loslier-Pinard’s alma mater Concordia University.

No stranger to the Open Studio Series, Halifax’s Georgia Skinner’s Clench working title) is an exploration of how particular emotions manifest in the body with a focus on anxiety, stress. Isolated, intuitive, and palpable, Clench is a tribute to habitual motions of  bodies under stress, the trickery of panic attacks and the struggle to feel content. Recently seen at the Bus Stop Theatre in Votive Dance’s EAST MEETS WEST, Georgia is a member of Halifax’s Nostos Collective and The Woods Hip Hop Society.

Posted by nstalenttrust at 1:00 PM No comments: