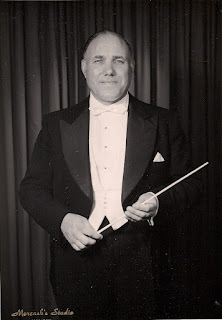 We're grateful to Kenneth Elloway's family for creating and sustaining this fantastic and generous special award since 2007. 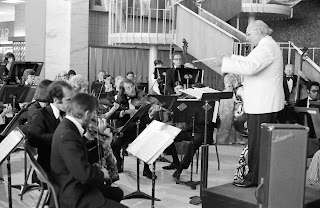 Kenneth Albert Elloway was born in the town of Weymouth, Dorset, on England’s south coast, in 1916.

He married Eva in 1939 at the start of World War II. They would have two children, Mary and Kenneth, and one granddaughter, Tina.

At the age of 16 or 17, he joined the British Army as a band boy. After a number of years, the Army sent him to its own school of music at Kneller Hall - the Royal College of Music. There his classes consisted of music theory, conducting, composing and arranging, etc. After graduation, he was entitled to put the letters A.R.C.M. (Associate of the Royal College of Music) after his rank and name. Eventually, he was posted as second in command to the elite Royal Artillery Band, stationed in Woolwich, just outside of London.

In 1955, Mr. Elloway resigned from the British army one day and enlisted in the Canadian Army the next to become bandmaster of the Royal Canadian Artillery band - joining them in March  while they were stationed temporarily in Germany. In October, 1955, the band returned to Halifax. Kenneth and Eva Elloway and their two children sailed with them, immigrating to Canada through Pier 21.

He was Director of the Maritime Conservatory of Music for 10 years; director of the Dartmouth Choral Society for a number of years until 1980; and he was the founding conductor, in 1975, of the Chebucto Orchestra. 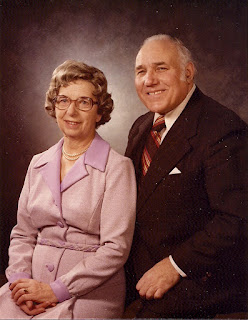 After his retirement from the Army in the mid-1960s, he taught music in the  City of Dartmouth school system. He was assistant Director of Music, and became Director a year or two before he died in September, 1980.

"The Elloway family has been proud to support my father’s award. I intend to continue supporting it as long as possible. The NSTT is a wonderful organization. It is heartwarming to see so many young people from all the arts given encouragement and support", states his daughter Mary (Elloway) Olsen

The Talent Trust is running and walking for creativity and art education in 2021 at the Blue Nose Marathon November 6 and 7, 2021. 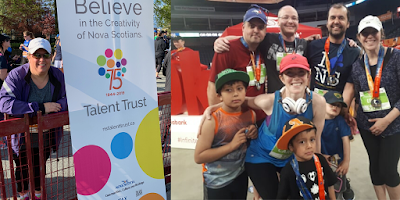 Last year we were able to fundraise $4,765 for our scholarship fund. Let's make an even more significant impact this year. (smile)

We wondered if you are a runner or walker?
"I'm not a runner, so I will walk 5 km again", says our Executive Director Jacqueline Steudler with a smile.

We are looking for Talent Trust Team members that will participate and fundraise for the Talent Trust by running/walking at the Scotiabank Blue Nose Marathon.

There are various runs that you can sign up for. Although the plans are for some limited in-person runs, there is also a virtual possibility.
Virtual means that you run or walk safely in your neighbourhood. You'll still get a Blue Nose Marathon T-shirt and medal. This means that you can participate even if you live outside of Nova Scotia (smile).

Join our team today by using the following registration link. You'll be automatically added to our team with this link.
https://raceroster.com/events/2021/47356/scotiabank-blue-nose-marathon/register?team=316112

Not sure what to expect when going to the page above? Have a look at this video, which gives you the registration information you need. (If you're a minor your parent has to sign you up.)
https://app.searchie.io/watch/Ml2RkMLjDa/
Posted by nstalenttrust at 6:00 AM No comments: 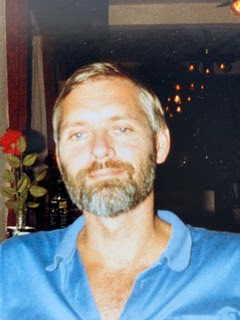 We're grateful to the late Robert George Jackson and his wife Daphne Cruikshanks for creating and sustaining this fantastic and generous special dance award since 2011.

The Robert George Jackson Award, named for the late Robert Jackson who loved the arts, was established in 2011 by his wife, Daphne Cruikshanks. It will be awarded, if merited, to a NSTT recipient who shows exceptional commitment and potential in dance. The award is $2,000.

Past Robert George Jackson Award winners are:
Thank you Daphne Cruikshanks, your generous support has made a big difference for so many. We are honoured to celebrate Robert George Jackson's love for the arts annually with our Nova Scotia community.
Want to hear more about the Talent Trust? Please sign up for our newsletter.
Want to support the next generation of Nova Scotian artists? Donate today! (smile)
Posted by Scholarship at 5:00 AM No comments: 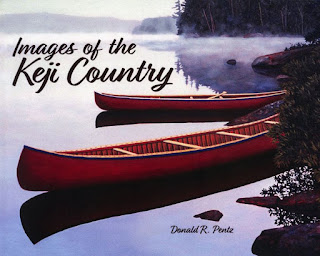 Just released is Donald R. Pentz’s latest book, Images of the Keji Country.  The book’s collection of gorgeous watercolours and black and white petroglyph paintings serves, in part, as a commentary on the painting process, with folksy journal notes from a veteran backwoods adventurer.

Pentz’s history with Kejimkujik, a 380 sq. km. tract in the interior of the southwest end of the province and the National Park that was founded in 1968, goes back almost 60 years – as a woodsman, naturalist, park interpreter and artist. He has explored and sketched its farthest reaches and has developed a profound understanding and respect for its physical and spiritual place.

Graduating with a Fine Arts degree from Mount Allison University in 1966, he later completed a Master of Fine Arts degree from the University of Regina (1979). That was followed by a bursary to take part in a special six-week painting program at the Banff School of Fine Arts. A recipient of Canada Council and Nova Scotia Arts grants, his work has been exhibited in galleries across Canada and as far afield as China, England, Cuba, France, Japan and the United States. Pentz has been exhibiting his work since 1967 and is an elected member of the Royal Academy of the Arts (R.C.A.) and the Canadian Society of Painters in Watercolour (C.S.P.W.C.).

A segment of Pentz’s art career was spent working as a zoological illustrator for the Museum of Natural History in Ottawa, drawing everything from massive dinosaur bones to miniscule sand fleas (amphipods). After a two year stint in Ottawa, Pentz moved back to Nova Scotia in 1970 and eventually worked as a naturalist/interpreter for Kejimkujik National Park and then as an illustrator/naturalist for the Nova Scotia Dept. of Lands and Forests. His paintings can be seen in over thirty corporate and university collections as well as numerous private collections. In 2007, he was inducted into the Visual Arts Nova Scotia Honour Roll.

Still active as an exhibiting artist, Don continues to go out on solo canoe trips to paint on location.

Want to support the next generation of Nova Scotian artists? Donate today! (smile)
Posted by Scholarship at 6:00 AM No comments: