In support of our 75th anniversary the Lieutenant Governor of Nova Scotia presents a inspiring piano recital from scholarship recipient Devin Huang, as part of the Evenings at the Government House Series. 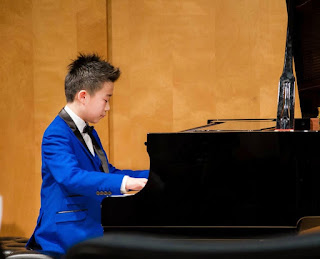 
Free and open to the public.


Since his introduction to piano at age 7, twelve-year-old Devin Huang has been blazing through repertoire, securing the loyalty of teachers like Mr. Gregory Watters and Lynn Stodola of the Fountain School of Performing Arts, and winning awards and recognition.

This year, Devin was selected as a national finalist and travelled to Calgary, Alberta to play in the Canadian Music Competition finals. Devin received first place.

Last year at the CMC National Finals, he received first place and also won the Grand Prize in the 11-14 age category for all instruments. He has been a first place winner for the past three years.

Want to support the next generation of Nova Scotia artists? Donate today!
Posted by Communications NSTT at 11:00 AM No comments:

Hear directly from scholarship recipient Sara Hartland-Rowe as she discusses her piece Us, created specifically for the First You Dream exhibition, a site-based wall drawing using acrylic, watercolour, organza, and paper with variable dimensions. 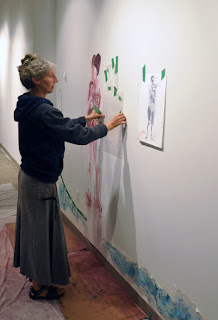 “A long time ago I sat for some time watching a line of ants carrying plant matter back to their nest. Some raced along, carrying very little. Others blundered and stumbled, weighed down by a great burden of matter. I asked my father, an entomologist, about this. Were the struggling ants understood to be worthier, better citizens? No, said my father, just unlucky.”

Hartland-Rowe's work demonstrates the bold inventiveness found in the touring exhibition that celebrates the 75th anniversary of the Nova Scotia Talent Trust, which includes a multi-generational mix of ten artists who at some point in their careers received Talent Trust scholarships.

The First You Dream: Celebrating 75 Years of the Nova Scotia Talent Trust exhibition includes drawing, ceramic, fibre, jewellery, mixed-media, painting, printmaking, sculpture and video pieces which were curated by Ingrid Jenkner (retired), David Diviney and Greg Davies in 2017, after a call to all Talent Trust scholarship recipients in visual arts.

The exhibition first opened at the MSVU Art Gallery on May 18 and ran until July 28. After its showing at the Cape Breton University Art Gallery in Sydney, it will conclude its tour at the Art Gallery of Nova Scotia - Western Branch in Yarmouth from November 22, 2019 to May 17, 2020.

Sara Hartland-Rowe has lived and worked in Halifax, Nova Scotia, since 2000. She received her BFA from NSCAD University, Halifax, and her MFA from the University of Illinois, Boston. She works as a painter and site-based installation artist, often experimenting with form and structure and representing human beings as the subject of her work. She was a finalist for the Lieutenant Governor of Nova Scotia Masterworks Arts Award for her large-scale permanent site-based painting for Halifax Transit, which was completed in 2010. She continues her practice in Halifax, Nova Scotia, where she teaches at NSCAD University.

Posted by Communications NSTT at 11:30 AM No comments:

Torture by Sound (2016) will be featured in the program:

Misophonia, a disorder that causes panic or rage at certain sounds, can be torture. Animation draws us into the world of those who suffer from it.


Canadian-born animator and filmmaker, Gwyneth Christoffel, grew up in Nova Scotia and has been making films since 2009. Her short films and animations have screened hundreds of times in countries around the world: Croatia, China, India, Australia and the United States. Her first animation, Recipe for Love, earned her a full-tuition scholarship to attend the University of Advancing Technology in Arizona, where she graduated as valedictorian. She is now animating in her hometown of Halifax, Nova


Want to hear more? Please sign up for our newsletter

Posted by Communications NSTT at 11:45 AM No comments: