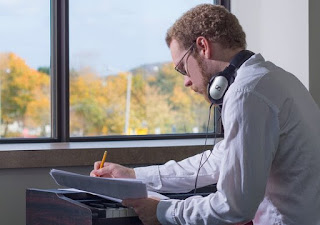 Recently the Lunenburg Academy of Music Performance announced that Gavin Fraser former Talent Trust recipient has been selected as their first-ever Composer-in-Residence.

That means Gavin will be coming home to Nova Scotia this Spring and to LAMP where he was the very first (and that year, only) participant in our inaugural Composition Academy. General manager Susan Corkum-Greek remembers wanting to cancel the program when a number of early applicants withdrew, leaving just one emerging artist; even two faculty artists had to cancel at the last moment.

"But Burt [Wathen] was determined," says Corkum-Greek. So Gavin got a week of one-on-one coaching with JUNO Award-winning composer Dinuk Wijeratne, as well as an afternoon with Lunenburg's own David Findlay, a longtime composer for film and television. Gavin has credited the experience, which included creation of the piano-cello duo Broken Vase premiered by Marika Bournaki and Julian Schwarz, as central to his decision to pursue composition as a career.

Gavin went on to complete his Bachelor of Music (Hons) in Voice Performance and Composition at Memorial University, followed by his Master of Music in Composition at McGill. He is currently completing his PhD at the University of Toronto, under the guidance of Gary Kulesha. And every year, he has returned to LAMP for the Composition Academy; in 2020, as program director.