WILDFIRE is a short film about a rebellious Mi'kmaw runaway, stalked by his abusive white father, who meets a two-spirit teenager drawn to his journey. As he learns Mi'kmaw language and culture from his new companion a deeper bond begins to grow between them. 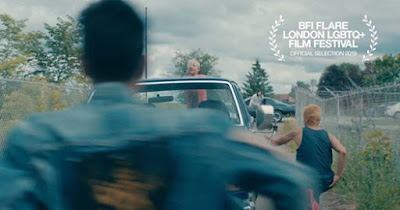 As Bretten Hannam reveals in his director’s notes, WILDFIRE is a story drawn from personal experience, re-imagined and turned on its head. On the surface the story is very much an adventure—three boys travelling the back roads on a quest. In reality, it’s a very personal story of reconnecting to heritage and coming to terms with two-spirit identity.

Since Nova Scotia doesn’t have any Indigenous teenage actors in ACTRA (the professional actors union). Bretten and Gharrett set out on a grassroots journey to find their two leads. Over 2 weeks they traveled to various reserves and communities in Nova Scotia and New Brunswick and auditioned over 50 Mi’kmaq teenagers, become the largest casting search ever, for Indigenous talent on the east coast on Canada.

The BFI Flare LGBTQ+ Film Festival is the biggest LGBTQ+ film festival in Europe and running for over 30 years. Wildfire is programmed in CHALLENGE ACCEPTED, a selection of ‘bold shorts showing the courage, intelligence and heart of those who have found a way to rise above their circumstances’.

Posted by Communications NSTT at 7:30 AM