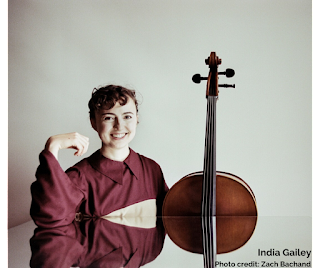 India Gailey is a cellist and composer who draws from many eras and genres to craft poetic narratives of sound. Before lockdown, she'd finished her master’s degree at McGill and begun performing solo concerts of new music across the country. She is also a member of New Hermitage, an avant-jazz ensemble that improvises the soundtrack of a post-apocalyptic world.

She is the recipient of five Nova Scotia Talent Trust Scholarships, including the Yuh Lih and Marion Kuo Award for Instrumental Excellence (2017).

India recently shared reflections with us on her music, memories, challenges, practicing during a pandemic and more!


What are your earliest memories of music?

I remember living art from a very young age. My mom had started learning to play the cello while she was pregnant with me, and I remember watching her practice. I did a lot of drawing and painting, wrote a lot of stories, and was very into dance and ballet. My parents listened to a pretty diverse array of music, which was great for dancing. When I was three or four, I remember making up songs… I would go into a corner of the yard and sing about dolphins or flowers or sadness in the bushes. I think it was around this time that I started to really love Vivaldi’s Four Seasons, and I wanted very much to play the violin so I could play “Spring”. When I was seven, I got to start learning to play a tiny fiddle. Before I began lessons, I remember playing my own very avant-garde version of Vivaldi. I finally arrived at the cello when I was ten. The student cello my mom had been using years earlier was still around, and it was taller than I was, but I wanted to play it. My childhood friend Owen was also learning to play on a giant cello, so he gave me some tips and we played fiddle tunes on our giant cellos together.

What has been your greatest challenge in relation to your music? Why?

Interacting with some of the toxic aspects of our society. Making a living.

I think I am a late bloomer in some ways. Our society likes early bloomers. For a while I was dampened by inadequacy, continuously internalizing the message that I should have already achieved grand impressiveness by the age when I was actually just beginning. After establishing some robust workaholism, I managed to overcome that particular doubt enough to realize that music was what I wanted to do and I could actually do it. Then there was the attitude of, if you want to play a classical instrument well, you have to fit into a particular mould, train in a very particular kind of virtuosity, play the Mendelssohn Scherzo excerpt the very best, play a Haydn Concerto the very best. There is value in that, but I have never been interested in wrapping myself purely in that genre. So was that ok, how would I navigate the world? Then, the rumours are true, it is super tough to make a living as a musician, at least in the young stage I’m at. But I don’t want to just make a living, I want to make art! I am supposed to solidify myself into a product for a world where artists are often expected to give away their work for free. And at the same time, art is so much more than monetary value, so I wish I could give it away for free. But the frustration of operating in a broken system is hard.

How have you managed practicing during the pandemic?

Inspiration has operated in waves much more extreme than in before times. Sometimes I’ve wanted to practice for hours, and other times I’ve played little ditty and called it a day. I have gone through periods of feeling so utterly lost in this realm devoid of live performance that it was like, well, I might as well just be a rock. Just sit here and hibernate while the blazing sun destroys my innards. But it has also been a luxury, to actually honour whatever honesty is arising about motivation or lack-thereof, and when I catch wind of a curiosity, to have the space to explore it. That’s what I’ve been doing, just following my curiosity. Sometimes that’s meant playing drones all afternoon, other times it’s been sight-reading willy-nilly through pieces I never learned, painting with watercolours, or sitting and listening to the birds. Right now I seem to be in a more energetic phase, wanting to compose, practicing the same piece for multiple consecutive days, and working to make projects real.

What quote best describes your commitment to music?

This is one of 59 slogans written by an Indian Buddhist named Atisha who lived about a thousand years ago. It has arisen in my mind a lot. I aspire to make music that touches people and cuts through to the essence of being human. Though, being in a delicate emerging stage of career, I’ve often looked for confirmation from other people. Accolades and recognition are certainly helpful and pleasant, but there were times when, no matter how much encouraging feedback I received, I couldn’t quite believe I was good enough or offering enough. Music is the path I’ve chosen, and I feel that choice is healthy when it is made out of love, not out of a bottomless need to prove my worth or usefulness, just pure love for the music and the world. So, I think “don’t expect applause” is to abandon seeking acknowledgement, which allows so much more appreciation to arise if acknowledgement does come. And of course, this slogan has gained new layers of meaning in the era of COVID. Since March, the only time I’ve heard live applause has been at Black Lives Matter demonstrations. It was magical.

Want to hear more about the Talent Trust? Please sign up for our newsletter.
Want to support the next generation of Nova Scotian artists? Donate today!  (smile)
Posted by Scholarship at 8:00 AM