Since 1957, the Talent Trust has given out 540 scholarships to gifted dancers who have gone on to develop their skills and build successful careers in performance and teaching. The very first dance scholarship recipient was Joyda Parry, a ballroom dancer who received the scholarship in 1957. Here is a snapshot into her exciting career.

In the November 1959 issue of Crowsnest Magazine, Joyda Parry's work as a ballroom dancer and instructor is highlighted:

A large number of Shannon Park children, ages eight to 16, have been enrolled to study dancing under Joyda Parry. These dancing classes are designed for children who have never had any basic training in dancing. The director's aim is to teach, all the necessary fundamentals of ballroom dancing, with a special emphasis on social etiquette. The types of dancing include foxtrot, jive, waltz, folk and square dancing. At the end of the season, the pupils will present a recital for their parents and friends. 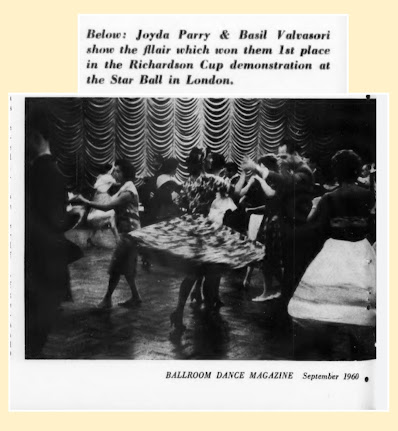 Last year Mrs. Parry was chosen to represent Canada in world championship ballroom dancing in London, England. She has been seen many times as principal dancer on the Don Messer and other television shows.

She is also pictured in the September 1960 issue of Ballroom Dance Magazine when she and dance partner Basil Valvasori won first place in the Richardson Cup demonstration at the Star Bell in London.  They attended the Chicago National Association of Dance Masters Instructors' Conference which is described in this article, and gives a snapshot of what this training looked like in 1960:

Scene was the very grand Grand Ballroom of the Sheraton Towers Hotel. From 9 in the morning until 10 at night, a floor full of teachers, from Washington State to Pennsylvania, from Canada to Mississippi, had themselves a great time studying a wide variety of material presented by a distinguished faculty.

During the preceding Training School and in the ensuing Convention there were other ball­room  classes, which added to the faculty list the names of Muriel Mills, Mrs. Theron Mandeville Woolson,  Louis Girard and James Lackey.

Next summer the CNADM is expanding the popular Ballroom Workshop to two days. For the one-day  sessions in Chicago and regional meetings during the coming season, lots of ballroom is promised.

No more can be found Joyda Parry's career just yet, but the search continues! It is amazing to go back in time and get a peek into the artistic journeys of our early Talent Trust recipients!
Want to hear more about the Talent Trust? Please sign up for our newsletter.
Want to support the next generation of Nova Scotian artists? Donate today!

Posted by nstalenttrust at 3:47 PM