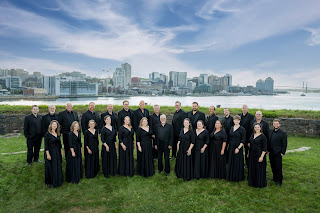 The Halifax Camerata Singers is Atlantic Canada’s premier chamber choir. Founded in 1986 by Artistic Director Jeff Joudrey, the Nova Scotia ensemble has distinguished itself by performing exciting choral repertoire that covers all periods and styles, with special attention to Canadian music. The auditioned choir is known for its high performance standards, claiming national recognition and the Healy Willan Grand Prize in the 2010 National Competition for Canadian Amateur Choirs.

Members of the Halifax Camerata Singers come from many communities for the opportunity to perform demanding choral repertoire. The choir often appears in collaboration with chamber ensembles, Symphony Nova Scotia, other musicians, and since 2001 has been the core choir of the Symphony Nova Scotia Chorus. The ensemble performs in regional concert series such as Music at the Three Churches, Musique Royale, Music at Trinity, Dartmouth Community Concert Series, and Indian River Festival, P.E.I.

The Halifax Camerata Singers organization has an active program of commissioning choral music from Canadian and international composers and is proud to encourage young singers through its Youth Mentoring Program, bursaries for the Nova Scotia Youth Choir, and commissioning of emerging and established composers. The organization was also instrumental in the success of Xara Choral Theatre, a choral theatre ensemble for young women aged 18–30 years, which was founded as a youth initiative of the Halifax Camerata Singers in 2008.

The choir has made five recordings:  A Time for All Things (2015), Solace:  Songs of Remembrance (2009), Songs of the Stable:  Christmas Music from Canada (2006), Songs of Home (1997), and Celtic Mass for the Sea (1993).  A Time for All Things was nominated for a 2017 East Coast Music Award for Classical Recording of the year, and won Classical Recording of the Year in the 2016 Music Nova Scotia Awards. Recordings are distributed through Leaf Records Inc. and Naxos Canada.

The Halifax Camerata Singers is a not-for-profit society managed by a volunteer board of directors. Funding comes from performances, donations, and fundraising, with supporting grants from the Canada Council for the Arts; Arts Nova Scotia; Halifax Regional Municipality; and the Lloyd Carr-Harris Foundation.

Want to hear more about the Talent Trust? Please sign up for our newsletter.
Want to support the next generation of Nova Scotian artists? Donate today!  (smile)
Posted by Scholarship at 5:00 AM