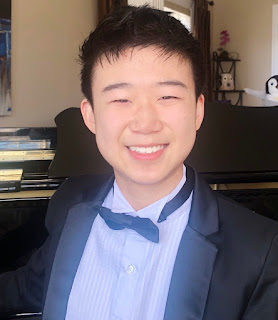 Devin won first place in piano at the Emerging Artist Stream at the Federation  of Canadian Music Festival.

You can see Devins stunning performance at the CFMTA here.

More about Devin (from his family):

Fourteen-year-old Devin Huang is a Grade 10 student at Sacred Heart School of Halifax and has been a student of Prof. Lynn Stodola since 2016. Since being introduced to piano at the age of seven, he has shown great enthusiasm towards piano performance, both solo and chamber.

Devin has had a very exciting and successful summer competing in two prestigious National competitions: Representing Nova Scotia at the Federation of Canadian Music Festivals National Competition in August, Devin won the First Prize in the Emerging Artist Piano Division, and representing the Nova Scotia Registered Music Teachers’ Association at the Canadian Federation of Music Teachers’ Association Piano Competition in July, he won the Third Prize as well as the Chopin Award for the best performance of a work by Chopin. Devin was the youngest competitor in both of these competitions.

In August 2020, Devin was named by CBC Music on the Canada’s hot “30 under 30” classical Musicians. He was interviewed by CBC Radio one and his video was broadcasted by CBC TV News also presented on social media by CBC Music.

Devin has been a regular participant in numerous Nova Scotia Kiwanis Music Festivals, placing first in all of his classes and winning several named prizes and scholarships, including the prestigious President’s Cup for the past four years as well as the Dr. Piano and Yamaha Canada Rose Bowl in 2020 and 2021.

He has been a National Finalist for the Canadian Music Competition, 2017-2019, winning first prize each year in his age category as well as the overall Grand Prize in all instruments, age 11 - 14 in 2018.

In October 2019, Devin had the honour to be invited by the Nova Scotia Talent Trust to play at the Lieutenant Governor’s House which was recorded for Eastlink television. The same year he was featured soloist with Nova Sinfonia, performing Mozart’s Piano Concerto K. 488, and made his recital debut on the Cecilia Concert Series.

In November 2020, Devin was invited by Scotia Festival of Music to present a solo recital in their 2020/2021 Chamber Music Series at the Peggy Corkum Music Room.

Devin was honoured and proud to receive the new Peggy Corkum/Musique Royale Legacy Award through the Nova Scotia Talent Trust in 2019 and 2020.

He was featured by Musique Royale on their 35th Summer Festival by a virtual concert released in August 2020. Devin is very honoured to have been chosen as the first recipient of the Debut Atlantic Music Prize in this year’s Nova Scotia Kiwanis Music Festival (NSKMF).

Devin has received tremendous support from the music community, receiving awards from the Halifax Ladies’ Musical Club and scholarships and special awards from the Nova Scotia Talent Trust. The generosity and support of these organizations continue to inspire Devin to strive to become a professional pianist.

Want to hear more about the Talent Trust? Please sign up for our newsletter.
Want to support the next generation of Nova Scotian artists? Donate today!  (smile)
Posted by Scholarship at 5:00 AM