Founded in 1995, Nova Sinfonia provides an opportunity for professional and emerging musicians to rehearse and perform together.  The symphony orchestra performs classical, romantic, 20th-century and pop music concerts.   They recently welcomed Melissa Doiron as their first Artistic Director and performed their first concert under her lead.  This concert was held October 24 at St. Andrew's Church and featured the as its soloist none other than Talent Trust scholarship recipient, Alex Yang. 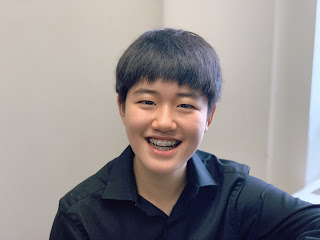 The concert opened with Crown Imperial: Coronation March by William Walton and the church filled with the beautiful sounds of Nova Sinfonia.  Once that piece finished, Alex stepped out before the crowd with more confidence than most adults have, let alone teens.  He sat down to play and it was easy to become mesmerized by his incredible talent.  Without even sheet music in front of him, the music effortlessly flowed through his fingertips. Everyone was leaning to the side to catch a glimpse of his hands flying across the keys.  Alex beautifully performed Piano Concerto No.2 in G Minor, Op. 22 by Camille Saint-Saens with the orchestra.  It was moving and breathtaking, and every note from every instrument was in unison, thanks to the incredible conducting by Melissa Doiron.  Once the Concerto ended, the audience was not ready to let Alex go, and he played Etude Op.10 No.4 by Chopin (also known as Torrent) as an encore.  Needless to say, it was fantastic.

The concert concluded with the Atlantic Canadian Premiere of Louise Farrenc's Symphony No. 3.  This was every bit as wonderful as the rest of the concert.  To see the concert in its entirety, visit the link on our Facebook page here.

Alex is a Grade 9 student at Halifax Grammar School and has studied under Professor Lynn Stodola since 2015.  As one of the youngest Talent Trust scholarship recipients, his list of achievements and accolades is already quite impressive.  He was the winner of the 2022 Nova Scotia Youth Orchestra Concerto Competition and won the Gordon Murray Rising Star Award for 4 years at the Nova Scotia Kiwanis Music Festival.  He has also taken home the Halifax Ladies' Music Club Junior Award and George Fleming Memorial Senior String Award, as well as the Dr. Piano and Yamaha Rose Bowl and Kiwanis President's Cup.  He was also the recipient of the Grand Award in the 2022 Federation of Canadian Music Festivals.  At just 14 years old, it is exciting to imagine what his future holds!

Will you help support scholarships for emerging artists like Alex? Check out our Raffle!

Posted by nstalenttrust at 10:18 AM