The Gala Recital for the 2018 Halifax Kiwanis Music Festival took place on May 5 at the Music Room in Halifax. Two Talent Trust scholarship recipients received accolades for Junior Piano. 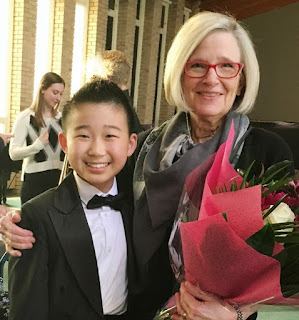 Devin Huang (pictured with his teacher Lynn Stodola) received the Adjudicator’s Recommendation to the 2018 Nova Scotia Kiwanis Music Festival for Junior Piano.
He was last year’s recipient of the first ever Gordon Murray Rising Star Award. He captured first place in each of his seven piano repertoire classes, and received an unprecedented mark of 98 in his Chopin class.
Devin’s achieved great things during the past year. He was one of the winners of the 2017/18 Chebucto Symphony Orchestra Concerto Competition, an honour which gave him the privilege of performing with the Orchestra on April 21, 2018. 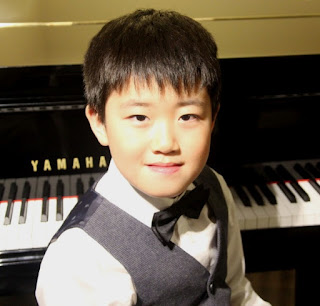 Alex  (Zixuan) Yang received the 2018 Gordon Murray Rising Star Award, which was presented at the May 5 Kiwanis Music Festival  Gala.
Alex plays at the RCM level 7/8, and was named as the Alternate to Devin Huang for the Provincial Festival Recommendation in Junior Piano.
He was a Canadian Music Competition national finalist in 2017, were he also received an Honorable Mention in the Scholarship Competition for Junior Piano.
The Provincial Music Festival Competition dates are Friday June 1 and Saturday June 2, 2018. The Gala Concert will be held on Saturday June 2 at 7pm at Denton Hall Auditorium, Acadia University, Wolfville, Nova Scotia.

This story was first published in our May newsletter. Subscribe to have all our monthly news delivered to your inbox!
Posted by Communications NSTT at 9:00 AM