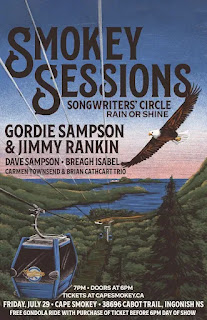 This month, Ski Cape Smokey in Cape Breton will be hosting a summer concert series called Smokey Sessions. The concert is scheduled for July 29 and is expected to be the biggest on-stage performance in Ingonish history.  The first of three concerts will have Gordie Sampson and Jimmy Rankin headlining the show, joined by former Talent Trust recipient and current Board Secretary, Breagh Isabel.
Breagh worked with Gordie Sampson at his songwriters' camp in Ingonish in her younger years.  In 2013, Breagh won the CNSLC Emerging Artist Scholarship for jazz piano.  She went on to collaborate with Classified to write and produce the hit "Good News", which was released in 2020 and nominated for 9 ECMA awards in 2021.
Breagh's music has also made its way onto TV and film soundtracks, including Grey's Anatomy Season 17 Episode 11 which features "See the Sun", co-written with Hunnah and Peter Groenwald.  Her song "SOS", co-written with Margot Todd and Nini Camps can be heard on the Season 2 Premiere of Batwoman.
Her most recent hit single, "Girlfriends" was released in 2021 and won SOCAN's Songwriter of the Year Award in 2021 and Song of the Year at the ECMA's in 2022.

To experience Breagh's wonderful talent, the concert series in Ingonish is not to be missed!  Get your tickets, enjoy a gondola ride up the mountain, enjoy the beautiful island view, and take in some amazing music by some of Cape Breton's most iconic songwriters.

Want to hear more about the Talent Trust? Please sign up for our newsletter.
Want to support the next generation of Nova Scotian artists? Donate today!

Posted by nstalenttrust at 9:54 AM