James MacLean and Laura Vingoe-Cram Pop Up with Theatre 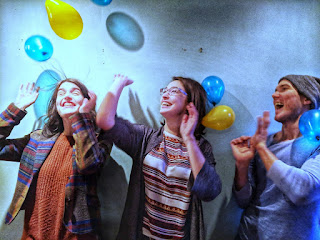 An immersive show about notions of childhood, nostalgia and rediscovering "play" as adults, Headless Barbie Dance Party takes audiences (or cider goers) on an interactive, delightful journey, with more than a few tears, back into the kaleidoscopic prisms of their youths.

“Katharine Kyle and James have been friends for 25 years. When we were kids, we used to get together and play games - obstacle courses, monopoly, being the Spice Girls - often tagged along by Katharine’s younger sister, Laura. Sometimes, Katharine Kyle and James would even torment Laura by transforming her room into a haunted house and hanging her Barbies up by their hair.

After a while Laura became part of the gang and soon our triumvirate was creating worlds out of plasticine, inventing characters with unstoppable powers and rescuing balls from evil Dobermans. The world was our oyster and creativity was constant.

Now all three have grown up and we are artists in our own right. James is an actor, Laura is a theatre director, and Katharine Kyle is a visual artist. We now get to be creative for a living, which, while awesome in and of itself, can be a struggle when it comes to tapping into that sense of childlike play that came so easily when we were kids. This pop-up performance is about trying to get back to that sense of ‘play.’

The Nova Scotia Talent Trust is highlighted through our real stories. After all the Talent Trust allowed us to pursue our childhood dreams of becoming artists. This piece is about what lead all three of us to pursue careers in the arts.”

James is a Halifax based actor and theatre creator. He is particularly interested in devised and immersive work. His recent show with Tea Time Creation Co saw a sold out run at Good Robot Brewing with the show Romeo & Juliet; A Drink Along, and in September the company received the ‘Fringiest Fringe Award’ from the Halifax Fringe Festival for their show ‘First Date Last Date’. He has worked as an actor with companies like Halifax Theatre For Young People, Shakespeare By The Sea, Eastern Front and Neptune Theatre. In 2008, James received the Theatre Nova Scotia Award through the Nova Scotia Talent Trust.

It is James’ preference to work collaboratively on shows, where the entire team can contribute to aspects of design, direction, and the overall shape of a piece.

Laura Vingoe-Cram is a director, playwright, producer and co-artistic director of Keep Good (Theatre) Company. In 2015 she graduated from the Royal Conservatoire of Scotland with a masters in Directing. In 2019, she participated in the Michael Langham Workshop for classical direction at the Stratford Festival. Last year she completed an emerging artist residency with 2b theatre company. Her credits include, Interactions with Art¨ (Halifax Theatre for Young People), Time of Trouble (Opera Nova Scotia), Constellations (Keep Good Theatre Company) and Oh Graveyard you Can’t Hold Me Always (The Royal Conservatoire of Scotland). In 2015, Laura received the Theatre Nova Scotia Award through the Nova Scotia Talent Trust.

Katharine Kyle Vingoe-Cram is a visual artist, comic artist and arts administrator, who is working on their first graphic novel, Kettle Harbour. Previously, they have exhibited paintings, drawings and collaborative works at various art galleries, particularly in Kingston, Ontario, where they lived for five years. They hold a BFA (2010) from NSCAD and an MA (2014) in Art History from Queen’s University. Their artistic interests include devising new forms of visual writing, themes of enchantment and grieving, queer kinship, gender identity, and the ethics of storytelling. HEADLESS BARBIE DANCE PARTY is their first time being in a play.


Want to hear more? Please sign up for our newsletter