First You Dream Exhibition Opens at AGNS-Western Branch in Yarmouth 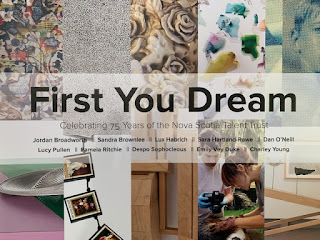 Since it takes long term commitment and far reaching foresight to create a lasting cultural imprint, it’s only natural that the Nova Scotia Talent Trust would partner with the Art Gallery of Nova Scotia for its 75th Anniversary celebrations.

For many decades the two organizations have nurtured and highlighted home-grown artists while encouraging young people across the province to imagine a life filled with creative expression, collectively deepening regional appreciation of the arts. The Art Gallery of Nova Scotia compliments the NS Talent Trust’s efforts to support aspiring artists in rural areas and its Western Branch in Yarmouth will be hosting the last presentation of the touring exhibition, First You Dream: Celebrating 75 Years of the Nova Scotia Talent Trust.

“I was honoured to be part of the curatorial team that brought First You Dream together. This exhibition features the work of 10 artists who were recipients of Nova Scotia Talent Trust scholarships between 1979 and 2016, a span of 37 years. These individuals are at various stages of professional practice and are engaged with a wide range of disciplines. They represent the breadth of creativity this province has to offer and the enduring impact of the Nova Scotia Talent Trust itself. We are more than pleased to see First You Dream on view at the Art Gallery of Nova Scotia in Yarmouth,” states curator David Diviney.

The exhibition includes drawing, ceramic, fibre, jewellery, mixed-media, painting, printmaking, sculpture and video pieces which were curated by Ingrid Jenkner (retired), David Diviney and Greg Davies in 2017, after a call to all NS Talent Trust scholarship recipients in visual arts.

Since the unprecedented efforts to support Portia White in 1944, the Talent Trust has awarded over 1,000 deserving Nova Scotian artists in the early stages of their professional development, with scholarships and special awards totalling more than $2 million dollars.

Charley Young
Charley Young was born in Calgary, Alberta and received her BFA from NSCAD University, Halifax, in 2008 and her MFA from Main College of Art in Portland, Maine, in 2014. She is an interdisciplinary artist working primarily with drawing, printmaking, sculpture, and public installation. She has been recognized in Blouin ARTFINO’s top 30 under 30 artists and has received the 2012 Talent Trust Lieutenant Governor’s Award and the 2012 Charlotte Wilson-Hammond/VANS Award presented by the Nova Scotia Talent Trust, among other awards. Charley currently lives in Bedford, Nova Scotia, and has a studio in North End Halifax where she continues her practice. She works as a Regular Part-Time Faculty at NSCAD University, teaching drawing and printmaking.

Dan O’Neill
Dan O’Neill was born in Montreal, Quebec. He received a Double Major with Honours in Painting, Drawing and Printmaking from OCAD University, Toronto, in 1993; a BFA in Studio Art from NSCAD University, Halifax, in 1994; and an MFA in Studio and Media Art from NSCAD University in 1999. In 2011, he earned the Recognition Award as an Established artist from the Creative Nova Scotia Leadership Council. He works primarily in lithography, although he continues working on his interdisciplinary practice that includes drawing, painting, writing and collage. He lives and works in Halifax, Nova Scotia where he has been teaching at NSCAD University as a Regular Part-Time Faculty for over 20 years.

Despo Sophocleous
Despo Sophocleous was born in Nova Scotia and received her BFA from NSCAD University, Halifax, in Jewellery Design and Metalsmithing in 2008. During her undergrad, she also participated in a year-long study exchange at Pforzheim University in Germany. She received her MFA from the Munich Academy of Arts in 2015 where she studied under Otto Künzli. She has received several awards for her work including the Talent Trust Lieutenant Governor’s Award for Artistic Achievement from the Nova Scotia Talent Trust, the DAAD Scholarship for graduate studies and the Herbert Hoffman Award. She is currently based in Halifax, Nova Scotia.

Emily Vey Duke
Emily Vey Duke was born in Halifax, Nova Scotia. She received her BFA from NSCAD University, Halifax and her MFA at the University of Illinois, Chicago. Since 1994, she has worked almost exclusively in collaboration with her partner, Cooper Battersby. In addition to several other prestigious awards they have received the pair was shortlisted for the Sobey Art Award in 2010. In addition to her work as a media artist, Duke maintains a strong critical writing practice and has been published in several art magazines in North America. Emily currently lives and maintains her practice in New York City where she teaches at Syracuse University.

Jordan Broadworth
Jordan Broadworth was born in Esquessing, Ontario. He studied at the School of the Museum and Fine Arts in Boston and NSCAD University, Halifax, and received his MFA from the University of Guelph, Ontario, in 1997. His work has been exhibited across Canada in Museums and Public Galleries along with a recent solo exhibition in New York City in 2016. He currently lives and works in New York City, where he has been based as an abstract artist since 2008.

Lucy Pullen
Lucy Pullen was born in Montreal, Quebec. She received her BFA from NSCAD University, Halifax, in 1994. After receiving her MFA from the Tyler School of Art, Philadelphia, in 2001, she held a tenured position in the Visual Arts at the University of Victoria. During her time there she led a collaborative team to build The Cloud Chamber, a freestanding sculpture that also works as a detector and imager of cosmic rays which is currently on display in the Dept. of Physics and Astronomy. She currently lives and continues her art practice in New York City, where she also teaches at Montclaire State University and Brooklyn College at the University of New York.

Lux Habrich
Lux Habrich was born in Montreal, Quebec and moved to Atlantic Canada in 2012 to attend NSCAD University, Halifax. In 2015, she received her BFA from NSCAD in interdisciplinary arts, focusing primarily on textiles and ceramics. She draws on her mixed racial and cultural identity as the foundation of much of her work and is interested in tactile craft practices. She has received numerous awards including the 2016 Charlotte Wilson-Hammond/VANS Award presented by the Nova Scotia Talent Trust and currently lives in Nova Scotia, where she maintains her practice and, most recently, has completed a residency at White Rabbit Arts in Upper Economy, NS.

Pam Ritchie
Pamela Ritchie was born in Amherst, Nova Scotia. She received her MFA from NSCAD University, Halifax, and completed postgraduate research work in Norway. She has received several awards and support for her work from institutions such as the Canada Council for the Arts, the Nova Scotia Talent Trust, the Government of NS and in 2017, she was the recipient of the Governor General’s Saidye Bronfman Award. She has served as the Canadian Advisor for several European exhibitions and her work has been exhibited in group and solo exhibitions spanning three decades. She retired in the summer of 2018, after teaching at NSCAD University for 34 years and continues her practice in Halifax, NS.

Sara Hartland-Rowe
Sara Hartland-Rowe has lived and worked in Halifax, Nova Scotia, since 2000. She received her BFA from NSCAD University, Halifax, and her MFA from the University of Illinois, Boston. She works as a painter and site-based installation artist, often experimenting with form and structure and representing human beings as the subject of her work. She was a finalist for the Lieutenant Governor of Nova Scotia Masterworks Arts Award for her large-scale permanent site-based painting for Halifax Transit, which was completed in 2010. She continues her practice in Halifax, Nova Scotia, where she teaches at NSCAD University.

Sandra Brownlee
Sandra Brownlee is a Halifax-based interdisciplinary artist and teacher. She received her BFA from NSCAD University, Halifax, and her MFA from Cranbrook Academy of Art, Michigan. She has received several awards including the Governor Generals Award in Visual and Media Arts (2014) and was a finalist for the Lieutenant Governor of Nova Scotia Masterworks Arts Award (2012). She lives and works in Halifax, where she has been an active teacher for 48 years and continues her practice in weaving and tactile notebook keeping.

Want to hear more? Please sign up for our newsletter
Want to support the next generation of Nova Scotia artists? Donate today!