Tune in for the 7th edition of the Talent Trust Artist Spotlight.

Every first Thursday of the month with your host, past scholarship recipient and current board member Breagh MacKinnon. 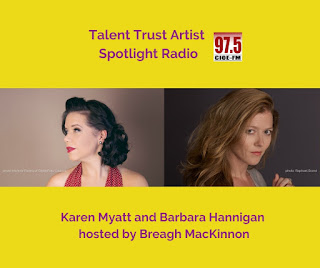 Listen in to hear about the intriguing musical lives of Karen Myatt and Barbara Hannigan.

Karen Myatt is a vocalist and theatre artist who has appeared on stages in New York, Mexico, and throughout Canada. Professionally, she trained at the Randolph Academy in Toronto and is a graduate of the American Musical and Dramatic Academy in New York City. In addition to performing around North America, Karen as a staple in the musical theatre community of Nova Scotia performing major roles in many of Neptune Theatre’s most popular productions including Beauty & the Beast, Into the Woods, Mary Poppins, A Christmas Carol, and Sweeney Todd.

Barbara Hannigan is Grammy award-winning Canadian soprano and conductor, known for her performances of contemporary opera. She has worked with some of the world's most prominent symphony orchestras including the Berlin Philharmonic, London Symphony Orchestra and the Mahler Chamber Orchestra. In 2016, Hannigan was made a Member of the Order of Canada, one of Canada's highest civilian honours.

You can listen to former episodes here.

Want to support the next generation of Nova Scotia artists? Donate today! (smile)
Posted by Communications NSTT at 10:30 AM