Jennifer Jones and David Longstroth with Rhapsody Quintet Serenade the Province House on May 14, 2019.

Along with their musical partners, Jennifer Jones and David Longstroth from the Rhapsody Quintet will provide an evening filled with well-loved music from jazz standards, film tunes, tangos to the Beatles and Queen at the Province House. 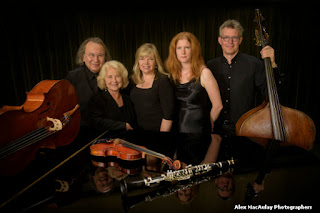 Free and open to the public.

Tickets are limited to 60
Available on a first-come, first-served basis.

Registration will open on April 30.

Rhapsody Quintet has been performing original arrangements of beautiful melodies from eras past and present like jazz, klezmer, tangos, movies and musicals since the mid 1980’s. Comprising of five classically trained musicians, Jennifer Jones, violin; David Langstroth, Bass; Diana Torbert, Piano; Eileen Walsh, Clarinet and Shimon Walt, cello; Rhapsody Quintet feel as at home in a symphony concert hall as they do in a jazz club.

Rhapsody Quintet has appeared twice as guest artists with Symphony Nova Scotia and performed in Ottawa in the National Arts Centre’s Atlantic Scene Festival, and as featured artists on Toronto’s Music Alive series.

The Quintet was honoured to be invited to perform for the re-opening of both the historic Public Gardens and Point Pleasant Park in Halifax following the devastation of Hurricane Juan and provided the music for the Premier’s Dinner in honour of the first recipients of the Order of Nova Scotia.

Rhapsody’s recordings have been used in ballet performances and professional theatre productions, including the Atlantic Theatre Festival and Neptune Theatre, and Chester Playhouse’s 2006 A Pitiful Ambition, a comedy by Lorne Elliott. They created a new show with collaborators actor/narrator Marcia Kash, cantors Tracey Scher and Ari Isenberg and Baritone Lowell Shore, entitled Kosher Ceilidh. And the group played their first European performance at beautiful Santa Margherita on the Italian Riviera for a private function – next door to Rod Stewart’s wedding party! The Quintet made a guest appearance on national TV on Candy Palmeter’s The Candy Show on APTN, and their music was used on the live to theatre Broadway production of The Importance of Being Earnest, starring late theatre great, Brian Bedford. In 2013, 2015 and 2017, Rhapsody was awarded the silver or bronze medal in the category Best Classical Artist/Group in the annual Reader’s Poll in The Coast.

Rhapsody has performed for Her Majesty Queen Elizabeth II and his Royal Highness the Duke of Edinburgh, Prime Ministers of Canada and other visiting foreign dignitaries. They’ve also played for audiences ranging from women in prison to patrons in pubs, worked with local choirs and done many in-school performances through local residencies around Nova Scotia. Their Sgt. Pepper Lonely Heart’s Club Band show at the Cohn helped to raise close to $30K for cancer patients in Halifax. The 2017-18 season sees a return engagement to the National Arts Centre on the NAC Presents Series.

Rhapsody Quintet has released six CDs to date. All recordings can be found on their CDs page.


Posted by Communications NSTT at 9:10 AM